Vacations, birthdays, holidays, weekends–really any night at home–is a good time for games. Family game night ideas come in all shapes and sizes for outdoor and indoor play. These handcrafted games and game tables made in Amish country can contribute to fun times with family and friends. Consider these family game night ideas for great ways to have fun, relax at home and save money.

The object is to get the most points.

Similar to corn hole, the Amish Rice Pitch Game lets you test your aim with a fun bean bag toss competition. Form two teams and take turns throwing the bean bags. Aim for the holes numbered 1, 2 and 3 on the board to earn points. If you land your bean bag in the “2 back” hole, you’ll have to subtract 2 points. The team with the most points wins.

Combines corn hole and shuffleboard and can be played outdoors or inside. 2 to 4 players. Take aim and pitch!

The object is to capture the most stones.

Set up the board between players. The board has 12 pockets. Place 4 stones in each of the pockets. Each player controls the 6 pockets along the side closest to them. The 2 large end pockets are called mancalas and each player has one. Taking turns, players select all the stones from any 1 pocket on their side of the board and, moving counterclockwise, place them in pockets until they’ve all been distributed. If you pass your mancala, deposit a stone, if you pass your opponent’s mancala, skip it. If the last piece you place is in your own mancala, you get to go again. If the last piece you drop is in an empty pocket on your side of the board, you capture that piece and any pieces in the pocket directly across the board and deposit them in your mancala. Play strategically until all the stones are gone from one row along the side and have been moved. The player with any pieces remaining on their side captures them and places them in their mancala. Then you count the pieces in each mancala to see who has the most.

The object is to get all your marbles to the opposite side of the board first.

The Chinese checkers board is in the shape of a six-pointed star, and it’s actually of German origin, not Chinese! 2 to 6 players can join in this game. It is played by having each player in turn attempt to move their 9 marbles across the board with a series of moves and jumps. This is a good game for developing some chess-playing strategies. Fun for children and adults.

The object is to move all of your marbles around the board first.

Designed for 4 to 6 players, Aggravation was first developed in the 1960s. The game involves rolling the dice and moving the marbles accordingly. Anytime you roll a 6, you get to go again. Marbles are moved clockwise around the board. You can jump over an opponent’s marbles, but not your own. What makes Aggravation aggravating? Land on an opponent’s marble and you can send it back to square one.

Checkers: The object is to capture all of your opponent’s 12 checkers.

Chess:  the object is to checkmate the other player’s king.

Checkers is played by moving game pieces in a series of moves and jumps to the other side of the board. If you reach the other side without getting captured, your piece will be kinged. Kings can move backwards and forwards.

Chess is played with 16 pieces per player. The player with the white pieces gets to go first. Chess pieces have different moves they can make. Players capture a piece when their move takes them to a square occupied by an opponent’s piece. That piece is then removed from the board. If a pawn makes it all the way to the other side, it can be exchanged for any other type of piece.

Checkmate happens when the king is in a position to be captured and cannot escape.

The object of the game is to be the first to get 3 in a row.

Any age can enjoy the classic tic tac toe game. And this version makes it even more fun with large wood Xs and Os. The game is played by taking turns adding Xs and Os until one of the players achieves 3 in a row horizontally, vertically or diagonally, or neither gets 3 in a row and it’s a tie.

The object of the game is to gain the most points by scoring goals with the ball.

When both players are ready, the ball is served in the center of the boardt. The “players” that knock the ball back and forth are maneuvered by handles on either side of the game table. The players make a series of passes and shots to move the ball down the table toward the goal. There are a number of different shots you can learn to maneuver players best and become a competitive foosball player.

The object of the game is to earn the most points.

Indoor shuffleboard is played with players sliding weights along the board and attempting to get them to land in high-scoring areas on the board in order to get the highest score. Play can get challenging when you knock off an opponent’s weights, taking them out of the running for those points. There are a number of different shuffleboard games where the number of points needed to win varies. 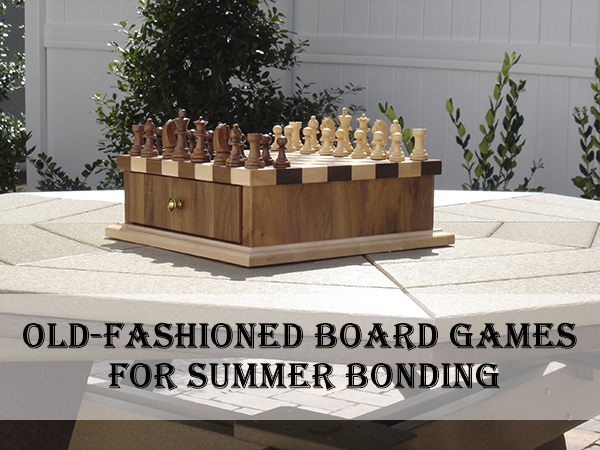 Summer is nearly upon us, and it’s time to think about keeping the kids entertained through steamy summer days. We Read more

TV stands and entertainment centers come with a wide variety of options. From a simple, solid wood stand to rest Read more

Books to Escape With: Some Recommendations While You Are Home

Remember story time when you were a kid? Whether it was at the local library, in the rocking chair with Read more

Whether you’re searching for a gift or the right storage for your own collection, the Amish Jewelry Box Buying Guide Read more