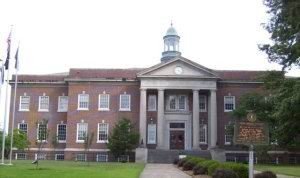 The McCracken County Courthouse desires an image of authority and respect, even as it is characterized by a small-town, friendly atmosphere. The courthouse chose our Arrow-back Deacon’s Bench to communicate all of those things while providing comfortable places to sit. The courthouse purchased four benches – all five feet in length, made of solid oak, and finished in a beautiful and welcoming golden oak finish.

McCracken County, the seventy-eighth county in order of formation, is located in the Jackson Purchase region of the state on the Ohio and Tennessee rivers and is bordered by Ballard, Graves, Livingston, and Marshall counties. The county was originally part of Hickman County, on land purchased from the Chickasaw in 1818. As soon as population warranted, the territory was divided into Hickman, Graves, Calloway, and McCracken counties. McCracken County was formed on January 15, 1825, and was named for Captain Virgil McCracken, killed at the Battle of the River Raisin, January 22, 1813, during the War of 1812. The county seat is PADUCAH. The county covers an area of 251 square miles.

The first meeting of the county court was held in the house of Isaac Lovelace, followed by meetings at Luke Swetman's (total costs $2 per session) until the town of Wilmington was laid out in January, 1827; frame courthouse and jail were completed there by Frederick Harper and James Martin. Paducah became the county seat in late 1831, and Braxton Small, who served as county clerk for thirty-three years, transferred the county records to Paducah by skiff during a flood in 1832. In 1842 Ballard County was created from McCracken and Hickman counties.

As the hub of river traffic on the Ohio, Tennessee, and Cumberland rivers, Paducah became a center of wholesale merchandising for the region. Tobacco was an important export, with much of the leaf going to New Orleans. Because the profitability of tobacco depended on slave labor, the area was linked economically and socially with the South.

During the Civil War, Paducah was occupied by the Union army in retaliation for the Confederate seizure of Hickman and Columbus on September 3, 1861. Many young men had followed native son Gen. Lloyd Tilghman into Confederate service during the early part of the war, and the 'D' Company of the 3d Kentucky was heavily populated by Paducahans. They accompanied Gen. Nathan Bedford Forrest on his two raids into Paducah. Other McCracken Countians opposed secession and joined the Union cause during the war.

Politically, McCracken was split, with Paducah espousing the Whigs, Know-Nothings, and later the Republicans, while the remainder of the county was staunchly in the camp of the Democrats.