“Lighthouses are not just stone, brick, metal and glass. There’s a human story at every lighthouse; that’s the story I want to tell.”  Elinor Dewire, author of articles and books about lighthouses (https://elinordewire.blogspot.com/).

Let me tell you about some of the lighthouses that our replications represent. 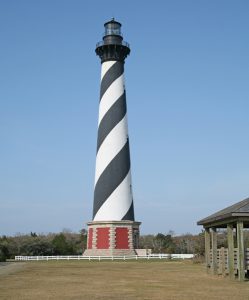 The Amish Cape Hatteras NC Hybrid Garden Lighthouse with Base 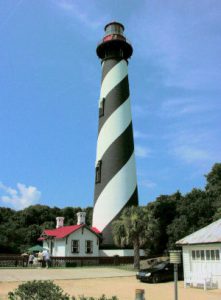 The St. Augustine Lighthouse was originally a wooden tower built by the Spanish. It was replaced by a structure made of coquina stone in 1683. Coquina stone is found in St. Augustine and only two other places in the world. The coquina tower was converted during the 1820s. By the end of the Civil War the St. Augustine lighthouse, known as the “Old Spanish Watchtower,” was in poor shape and crashed into the sea in 1880. A new lighthouse made of brick was completed in 1874. During World War II, men and women trained for the Coast Guard in St. Augustine and used the lighthouse as a lookout post for enemy ships and submarines. Many are attracted to the ghost stories and suggestions of paranormal activity at the St. Augustine complex, drawing many visitors who are interested in both the history and the spooky.

For more information on the St. Augustine Lighthouse visit:  https://lighthousefriends.com/light.asp?ID=347. 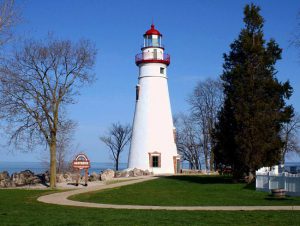 Located on the Marblehead Peninsula, the grounds surrounding the lighthouse offer views of Lake Erie, Sandusky Bay, Kelleys Island and South Bass Island. The Marblehead Lighthouse has been featured on a U.S. postage stamp, on Ohio license plates, and is now part of the Ohio State Parks system. Construction was approved by Congress in 1819 to erect a light tower on the Marblehead Peninsula to guide vessels into Sandusky Bay and help them safely pass the rough southern passage between Ohio mainland and a group of offshore islands. The Marblehead lighthouse opened in 1820. Marblehead Lighthouse was one of five chosen for the Lighthouses of the Great Lakes series of postage stamps designed in 1995. It emits a green flash every six seconds and is visible for eleven nautical miles.

Don’t miss this aerial view of the Marblehead lighthouse.

The West Quoddy ME Lighthouse 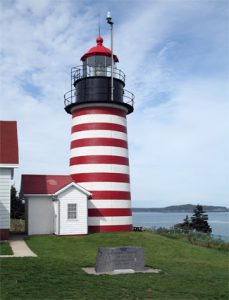 In 1806, trade was increasing and local citizens petitioned for a lighthouse to mark the entrance to Passamaquoddy Bay. In 1807, Congress allocated $5,000 for the project. The West Quoddy Lighthouse is one of the only still-standing U.S. lighthouses with red and white bands and is one of the first to have a fog bell and a steam whistle. The beacon at West Quoddy was originally fueled by whale oil, then lard oil in the 1860s, and then kerosene somewhere around 1880. The West Quoddy Lighthouse gives off two white flashes every 15 seconds and a fog signal blast every 30 seconds.

Listen for the fog signal in this Youtube video of the West Quoddy ME lighthouse. 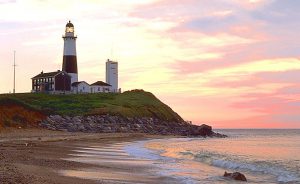 The Montauk NY Lighthouse was the first lighthouse in New York State and is the fourth oldest active lighthouse in the US. Construction was approved by President George Washington in 1792 and construction began in 1796. The tower was built on Turtle Hill, 300 feet from the edge of the cliff. Shoreline erosion now places the tower just 100 feet away from the edge. A seawall was built at the base after World War II, but the erosion continued. Giorgina Reid, a textile designer, contributed a plan called Reed-Trench Terracing to combat the erosion. Her concept involved building terrace platforms made of beach debris. The Erosion Control Project of Montauk Point was approved and implemented in 1998. Unfortunately, erosion continued to pose a threat and discussion of moving the lighthouse back from the shore (similar to the situation with the Cape Hatteras Lighthouse in NC which was successfully moved) began. The light in the Montauk NY Lighthouse flashes every 5 seconds and can be seen for 17 nautical miles. This lighthouse was designated as a National Historic Landmark in 2012.

For more information on the Montauk, NY lighthouse visit: https://lighthousefriends.com/light.asp?ID=391. 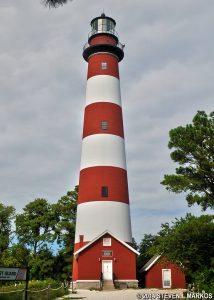 The Assateague Lighthouse was built to give light between Cape Henlopen, Delaware and Cape Charles, Virginia. It was originally built in 1833 and replaced in 1860 by a taller, more powerfully illuminated brick lighthouse. Construction was delayed by the Civil War. After the war, work resumed, and it was completed in 1867. The original lighthouse was built on the southern tip of the island, but since barrier islands like Assateague shift and change, the island has grown five miles since the site was first chosen. The Assateague has warned passing ships and locals of the shallow waters off Assateague for many years. The Assateague VA Lighthouse has twin, rotating lights that flash one after the other. The lights can be seen 19 miles out to sea.

The Amish Assateague VA Hybrid Garden Lighthouse with Optional Base

For more information on the Assateague VA lighthouse, visit: http:/lighthousefriends.com/light.asp?ID=451.

They stop mid-sentence to look up. They always bring you to the porch or backyard to point out a sighting. Read more

Things to Know About Cupolas

What are cupolas exactly? How do they work and how can you customize them? We’re diving into things to know Read more

Decorative garden windmills make a lovely addition to home or business. They offer a warm greeting and a unique look. Read more

The Advantages of Folding Furniture

The advantages of folding furniture don’t all necessarily focus on saving space. While it’s true this transformable furniture is considered Read more