“A place for everything and everything in its place” was the slogan that propelled the roll top desk to popularity during the 19th century. A desk full of small drawers, hideaways, and perfectly sized compartments with a top that could be closed to conceal any clutter was a delight for many and became a popular choice for small to medium-sized offices.

But first, it began with a king.

At the King’s Request

King Louis XV of France, also known as Louis the Beloved, was interested in a stylish and secure writing station that could be shuttered and locked. He asked his cabinetmaker, Jean Francois Oeben, to create such a desk for him. Oeben worked on the design for the last three years of his life. His successor, Jean Henri Reisner, spent six more years (1763-1769) perfecting it.  More than a century would pass before the roll top desk would make its mark in the furniture design community.

The Design of the Roll Top Desk

The design elements common to roll top desks easily supported the daily correspondence of the time. The small drawers, pigeonholes, and shelves provided storage for writing utensils, fresh paper, ink, envelopes, and stamps. The most attractive element of the roll top desk was the slatted wood cover called a tambour, which rolled down and locked. This attractive feature concealed any clutter or work in progress.

The Amish Berkley Rolltop Desk displays the beauty of the secure roll-down top. 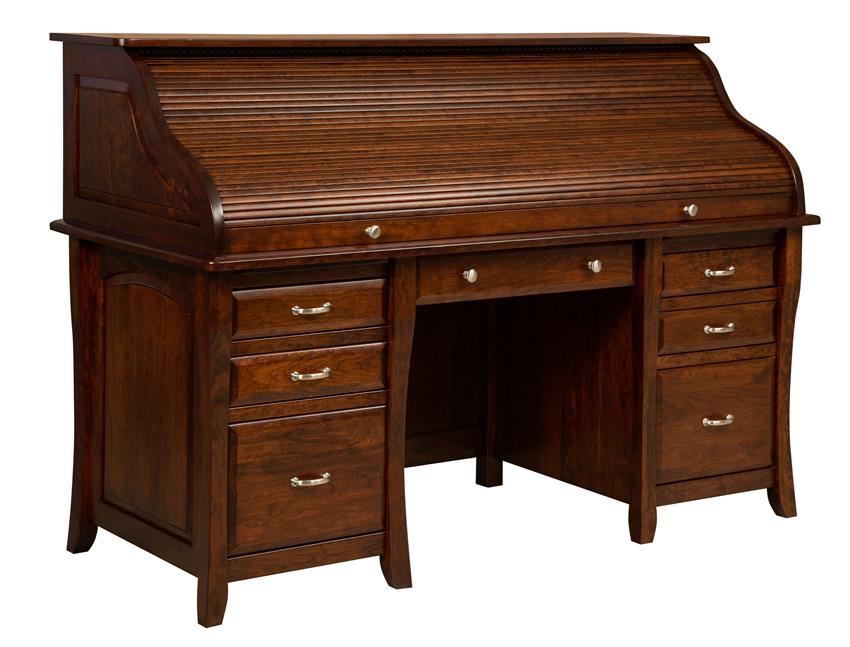 In 1850 Abner Cutler, owner of Cutler Desk Company, patented the roll top desk. Cutler’s design perfected the flexibility of the tambour that slid down to cover the desk top when it was not in use.

A Blending of Desk Styles

Pedestal desks feature a rectangular top which rests on two cabinets that contain stacked drawers. Each stack of drawers is called a pedestal. This pedestal base is featured in the Amish Mission Roll Top Desk. 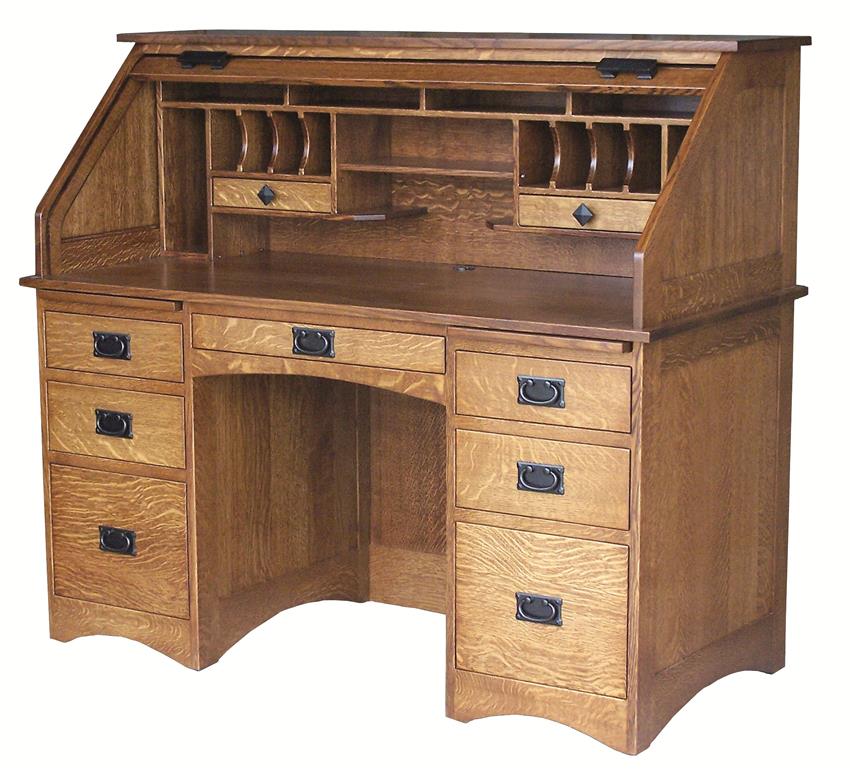 Named after the London residence of the Prince of Wales, Carleton House desks have various nooks, crannies, and drawers, much like roll top desks. The writing area rests on legs instead of a pedestal for a more elegant, refined look.

The delicate legs of the Amish Queen Anne Secretary Roll Top Desk resemble the design of the Carleton House desk. 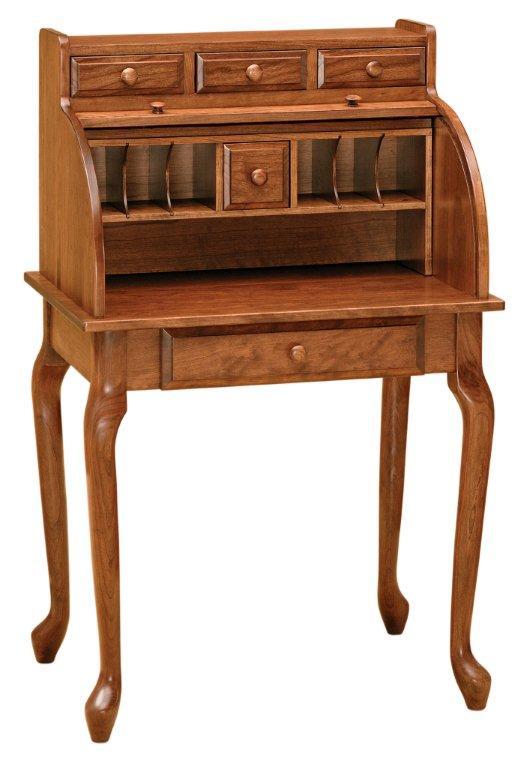 The Deluxe Amish Roll Top Desk with Optional Top Drawers features a tambour top made of wooden slats placed on a flexible material that allows it to close easily and completely. 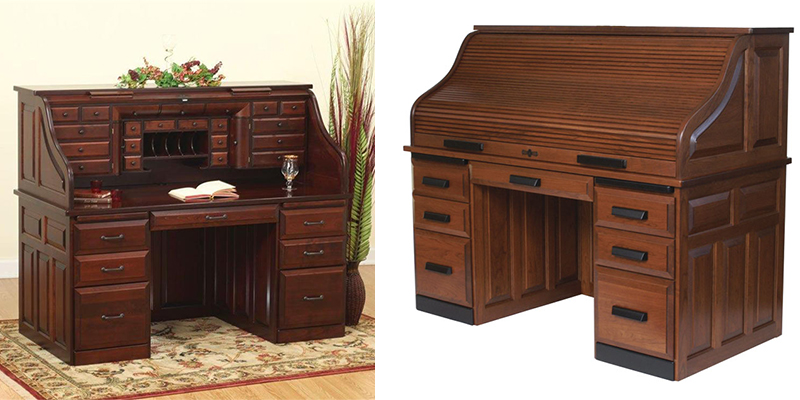 Favorite Features of the Roll Top

The Amish 65” Castlebury Roll Top Desk offers all the desirable features of a roll top desk. 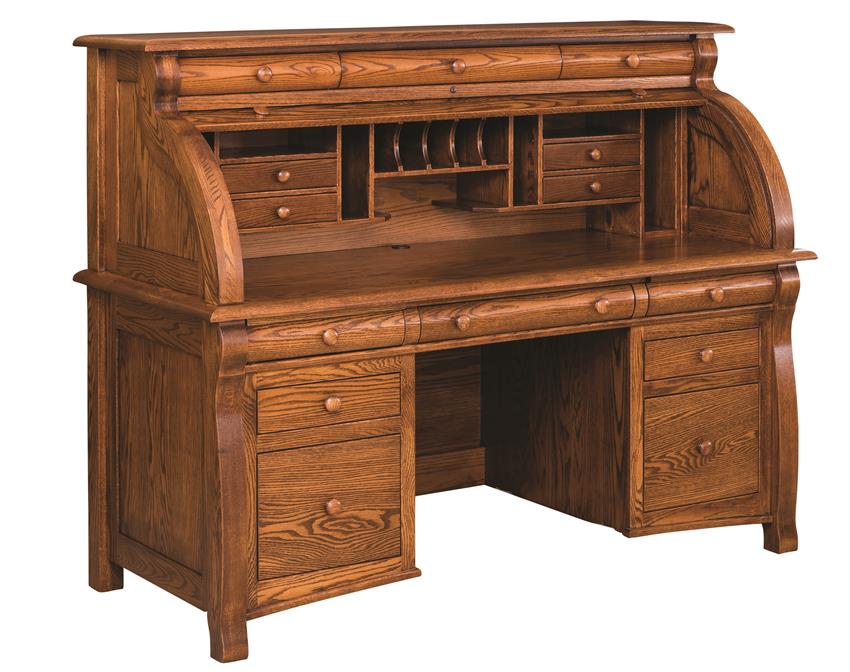 From Mainstay to Sought-After Antique

The roll top desk fell out of favor in the early 1900s with the introduction of sleek glass and steel desks. Larger quantities of documents also made the small stacked drawers and mini-shelves impractical. The need for more storage saw roll top desks replaced with filing cabinets.

Roll top desks were also known as curtain desks during their rise to fame. Today, the design of these desks reconnects us with the past, which has caused the roll top desk to become a sought after antique.

The Amish Mission Deluxe Roll Top Desk exhibits all the beauty and elements of the original roll top design. 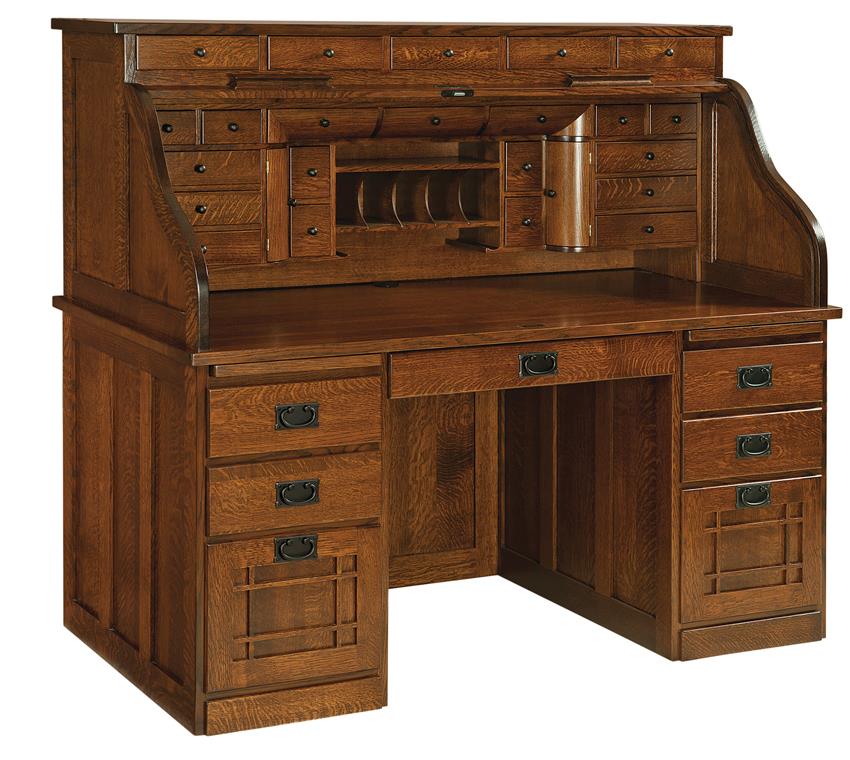 Often used in home offices, bedrooms, and hallways, we are sure the curtain will never close on the demand for roll top desks.

Related Posts
A Brief History of the Windsor Chair {Infographic}

A Brief History of the Windsor Chair Infographic and text, plus links below! Here's the text and links for the Read more

5 Reasons to Invest in an Adirondack Chair

If being outside in such a relaxed state you could fall asleep where you sit appeals to you, then you Read more

If you had to choose between a coffee table and a console table, which would you choose and why? These Read more

Things to Know About Grommets

Shall we talk grommets? What are they? What purpose do they serve? What are the benefits and why should you Read more